Remember this? It seemed like such a good idea at the time!

If you’ve been following the news, you’ll know that on last week, Governor Little just unveiled at $225 million dollar teacher pay increase to help make our state more competitive in the teacher pay department. I support Governor Little, and while that sounds great, as soon as I looked at the details I realized that this bill-like the advanced portfolios for expert teachers-is a disaster. If we pass this bill, with one stroke of pen we will ensure that every “advanced” teacher on this payscale will have either a 3 or 4 (on a 1-4 point scale) on all 22 components of their annual evaluations.

END_OF_DOCUMENT_TOKEN_TO_BE_REPLACED

“Liberal agenda, un-American, and unconscionable acts” are some of the words being used to describe the ballot initiative in the state’s newspapers. END_OF_DOCUMENT_TOKEN_TO_BE_REPLACED

My glass ball didn’t do too bad of a job last year in predicting some major outcomes of the 2015 legislative session.

The major development of 2015, of course, related to the contentious tiered licensure and career ladder legislation designed to increase teacher pay while simultaneously deleting certain teacher protections in compromise for the pay bump.

While the tiered licensure plan fell through due to the nearly lockstep opposition of stakeholders, many of its components were instead simply shifted to the career ladder bill that ultimately passed.  As predicted, many measures seen potentially retaliatory to teachers such as the continued emphasis in utilizing the Danielson Model for teachers of all types (including Special Education, English Language Learners, Academy/At-Risk Teachers, etc) and Value Added Measures (VAM) are cemented under the law in determining a teacher’s rating.

END_OF_DOCUMENT_TOKEN_TO_BE_REPLACED

There is some irony in the precarious position the Gem State has found itself in. Despite setting a goal in 2010 for 60% of Idaho’s young people under age 34 to attend postsecondary education, the Idaho legislature then decided the way to encourage young people to attend college is to significantly inflate the tuition costs for those would-be students in the subsequent years that followed.

This objective was coupled with a comedic “Go-On” and “Don’t Fail Idaho” campaign courtesy of Idaho’s Albertson Foundation designed to prod would-be students into higher education despite the increasing costs to attend tethered together with lackluster job prospects in the Gem State to find employment. END_OF_DOCUMENT_TOKEN_TO_BE_REPLACED

The J.A. & Kathryn Albertson Foundation executive director, Roger Quarles, recently announced that the foundation will shift their philanthropic spending away from education and more towards community spending projects.

If anyone was shocked by this move, they shouldn’t have been; the foundation lost over 20 million dollars last year in an educational data tracking project they had no business involving themselves in.

Albertson blindly ignored the advice of the federal government warning against giving money to the ill-thought-out project up when the US Dept. Of Ed refused to issue Idaho a grant for a longitudinal data tracking system citing a myriad of problems with Idaho’s proposal.

Despite this warning, Albertson ponied up over 20 million dollars in cash for the project themselves…dollars that were so dysfunctionally spent the foundation is now refusing to give another dime to the project.

A little context here: See, a few months ago I took on the task of calculating the total cost of ISEE/Schoolnet, Idaho’s longitudinal student and teacher data tracking system.

Not only did a narrative of a taxpayer checkbook out of control quickly become apparent with the project bloating even the wildest projections of cost to develop (upwards of 42 million and counting), but an additional narrative of total dysfunction also emerged.

END_OF_DOCUMENT_TOKEN_TO_BE_REPLACED 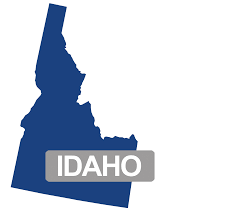 Last year I wrote that I was a half glass empty optimist. I was encouraged by a rebounding economy that surly would help districts restore furloughs, unfreeze salary grids, and even help pay for those twinky yellow things on the road that apparently shuttle students to school.

I was cautious as many districts either continued or implemented new four day school weeks, put bandaids on crumbling infrastructure, and particularly struggled in those minority of districts that have steadfastly opposed levies despite dwindling statewide funds.

END_OF_DOCUMENT_TOKEN_TO_BE_REPLACED

Penni Cyr emailed a response to the changes SBoE voted on and approved last week.  Her response, in full, is below.

END_OF_DOCUMENT_TOKEN_TO_BE_REPLACED 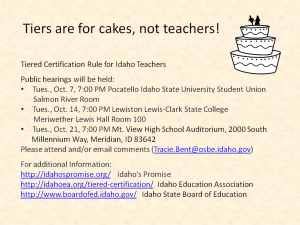 Idaho has proposed a Tiered Licensure rule that potentially ties a teacher’s license to student test scores and local evaluations. To bribe teachers to accept this bad idea, an ‘increased’ teacher salary would also be tied to these evaluations. Tiered licensure is bad for kids, taxpayers, and teachers.

Below is a quick synopsis of reasons why this is poor legislation, along with resources to better educate yourself and distribute to others.

END_OF_DOCUMENT_TOKEN_TO_BE_REPLACED

The Board of Education recently sent out an open letter to Idaho’s educators regarding the new Tiered Teacher Certification proposal.

The letter flatly admits that Idaho’s teachers aren’t compensated anywhere near where they should be (true), but then argues that the only way Idaho legislators would find a raise to be palatable is to move to a tiered teacher certification system (false).

A few things to point out here: a tiered certification system is a completely separate topic than teacher compensation. The attempt to conflate the two different items as being one and the same is deceptive, at worst, and misleading, at best.

END_OF_DOCUMENT_TOKEN_TO_BE_REPLACED

Below is the letter I sent to the Board regarding TIERED LICENSURE PROPOSAL FOR STATE RULES.

According to the new rules, an administrator’s evaluation has the potential to impact your teaching certification.  This is particularly true for new teachers.

Remember, we only have 20 days remaining to contact the board and let them know what you think!

Please cc me on any emails you send to the board regarding this policy change. I would like to publish fellow educator’s viewpoints.

The Board’s email is board@osbe.idaho.gov

My email to cc is levibcavener@gmail.com.

My letter,  in full, is below.