Thomas Jefferson Charter School is located in Caldwell, Idaho with a mission statement of creating “virtuous citizen leaders.”   However, Thomas Jefferson is also home to the congregation of Wellsprings Church.

Idaho’s charter schools are public schools bound to the same laws, codes, and regulations of any other school and government entity.  The entanglement between a public school’s facility hosting a religious event is worth an examination.

It is perhaps with some irony that the school’s namesake, Thomas Jefferson, is cited in coining the phrase “separation between church and state.”  Jefferson’s famous writing states:

“…I contemplate with sovereign reverence that act of the whole American people which declared that their legislature should ‘make no law respecting an establishment of religion, or prohibiting the free exercise thereof,’ thus building a wall of separation between Church & State.”

In fact, Jefferson addressed the very issue of religious use of public property in his involvement in the construction of the University of Virginia.  Then, Jefferson forcefully came out against the university hosting religious services, writing:

“the buildings of the Univ. belong to the State, that they were erected for the purposes of an University and that the Visitors … have no right to permit their application for any other”

SECTARIAN APPROPRIATIONS PROHIBITED. Neither the legislature nor any county, city, town, township, school district, or other public corporation, shall ever make any appropriation, or pay from any public fund or moneys whatever, anything in aid of any church or sectarian or religious society, or for any sectarian or religious purpose, or to help support or sustain any school, academy, seminary, college, university or other literary or scientific institution, controlled by any church, sectarian or religious denomination whatsoever;

To be fair, Wellsprings Church does pay rent to Thomas Jefferson in the sum of $1,000 per month for use of the facility.  However, this leaves two questions:

The second question examines the public subsidization of the church beyond the rent payment.  See, in this case the church does not have to build or maintain their own facility. Instead, Joe Public pays for this facility through paying taxes.  In other words, if you can’t afford to build a church, instead build a school and then rent the facility.

Traditionally, Joe Public can make an opinion heard relating to the choices of public schools by voting in and out school board leaders.  But charter schools don’t operate like normal public schools. There is no such thing as headed to ballot box to choose new school board members for Idaho’s charter schools.  So if Joe Public isn’t too keen on the use of religious services in an Idaho school, voting is not an option to effect change.

The entanglement has more implications:  What is staff, administration, or school board members are also congregants in the church?  This opens up the possibility that decisions made internally may not be focused on the benefit of the public school, but perhaps the church.  At the bare minimum, it leaves open the possibility of impropriety.

It also leaves the door open that other entities, now alerted that space is available in a public facility for religious services, wish to enter in their own agreements with the school.  Is the school equally ok with Islam, Hindu, or Sikh services? What happens when the Church of Satan wants to rent out the space? 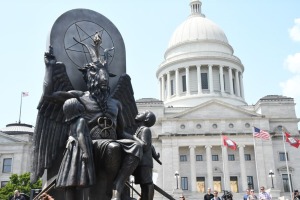 It seems that once the door is open to religious services in the public space, it is open entirely.  The Church of Satan, for instance, likes to poke at just this type of conflict by forcing states to allow them to place their own religious inconery in public places where other religious iconery (namely, Christian) have also been allowed.  It’s a slippery slope. Ask Oklahoma how that one turned out.

But let’s go beyond the legal and religious issues:

I asked for a copy of the rent agreement between Thomas Jefferson Charter School and Wellsprings church.  Mr. Gale Frank, the Board’s clerk, informed me that no such agreement exists. The lack of written agreement is cause for concern for several reasons:

Let’s start with liability.  Does Wellsprings carry its own liability insurance policy?  My hunch is that it does not which leaves TJCS open to the possibility that it could be financially on the hook if there is property damage–or worse yet human injury–during the time of the event.

What if a church’s sacrament involves a traditional offering and consumption of wine?  Would this ritual violate Idaho’s law in possession of alcohol at public school property?

Is the school hosting a church a tacit endorsement of the particular religion or the church itself?  If so, what is a student in the school left to believe about the church, especially if they are of a different faith than the church their school is hosting?

The balance between public and religious interests is as old as this country.  While I can’t be sure what Thomas Jefferson would say about this particular topic, I think it would be fair to say he would certainly have an opinion on the issue.