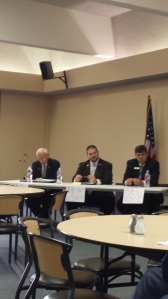 There were about 30 attendees at the tiered licensure public hearing tonight on the College of Idaho campus.

Debbie Olson, a teacher in Caldwell spoke about students entering the 5th grade reading 50 words per minute, and the need to celebrate when she can take that student to 100+ words a minute.

However, she despaired that a standardized exam, like the SBAC, doesn’t necessarily measure this fluency growth.   She is also concerned because this is the very first year that SBAC results are available to the public, including teachers.

“The doctor is not judged for a patient who chooses to ignore the doctor’s prescription after the patient leaves the office,” she said.  “A teacher cannot be judged for a student’s learning outside the classroom.”

Julie Dillehay, a counselor at Vallivue High School and for the College of Idaho spoke about serving all students, regardless of the type of student that walks through the door.  She is concerned that the tiered licensure will make teachers fearful of working with “high-risk” students that are unlikely to achieve proficient test scores.

She said this concerns her because not only will that mean less qualified teachers to work with those students, but it may even push educators out of the state over their concern of losing licensure and compensation.  “Tiered licensure will drive teachers away instead of recruiting them in.”

In addition, she worries about the relationship between an administrator and a teacher under such a model as it may create an adversarial model between the two instead of a supportive relationship.

Victoria Young, a local author spoke about the need to implement “best-practice” tools in the state.  She stated the National Research Council states that test-based incentives are an inappropriate tool in education, that continued experimentation with test-based incentives should not displace other programs proven effective.

She said that outcome based education theory has not proven to be an effective tool in the classroom environment, and she urged the panel to reject to proposal.

I testified as to the inappropriateness of tying standardized test data to teacher’s compensation, evaluation, and certification, particularly for special education students, English Language Learners, and other minority populations.

I also spoke about how Charlotte Danielson herself disagrees with the use of her framework tool in setting compensation and certification.  She writes,

But the minute a teacher’s performance rating is a high-stakes matter, people are going to do whatever they have to do to be rated highly. And the things you have to do to be rated highly are exactly the opposite of things you’d do if you wanted to learn–you wouldn’t try anything new, you would be protective, you would be legalistic about the ratings, and you’d argue. None of that makes you open to improving your teaching.

Tim Rosendick, the superintendent of Caldwell School District stated that he feels he already has the tools to remove an ineffective teacher from his district, and that tiered licensure is not necessary or needed in order for him to retain an effective group of employees within the district.

He was also concerned about the two observer requirement in the proposal.  He acknowledged this might create a safeguard against a rogue administrator misusing their position to provide bad feedback.

He spoke about “unequal accountability” because many teachers teach content that are not measured by the SBAC / IRI.  He queried, “what other measures will be as equally rigorous, that will hold those teachers to an equitable level of accountability?”  The result is that many teachers may be held to a higher accountability level than their colleagues.

Dr. Rosendick reminded the panel that Idaho is experiencing a teacher shortage, and was worried that it would have a negative impact on recruiting future teachers

Rep. Hixon encouraged audience members to continue to contact him with concerns in the future, and Sen. Rice stated he was willing to meet attendees in person after the forum.